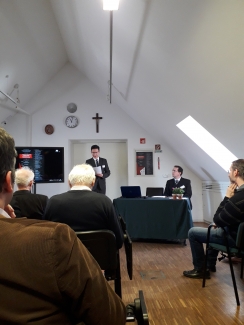 The Fraknói Research Group represented itself by several members at the conference The Effects of the Hungarian Soviet Republic on the Catholic Dioceses held in Veszprém on 21 March 2019.

Research fellow Krisztina Tóth analysed a memorandum about the organisation of the military chaplaincy written by István Zadravecz OFM in 1919, which was written for the request of Miklós Horthy.

External member Mátyás Varga gave a lecture on the relations of the parishioners and priests towards the Hungarian Soviet Republic in 1919 through the Historia Domus documents of the parishes in the Diocese of Székesfehérvár.

External member Máté Gárdonyi contributed to the conference by chairing the third section.