Five years ago on this day: Wolfgang Reinhard's lecture in Budapest 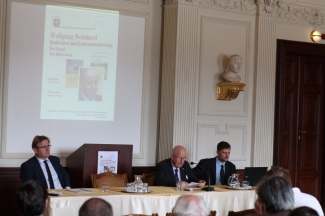 Professor Reinhard was born in 1937. His research area is the early modern ages. He invented with Heinz Schilling the model of confessionalization which was the most important paradigm shift in Church history since Leopold von Ranke and Max Weber.

The same event was the closing event of the five-year-project of MTA-PPKE Church History Research Group. Péter Tusor, leader of the mentioned Research Group has announced on that afternoon that Vilmos Fraknói Research Group (2017-2022) has been established for the next five-years-project term as the successors of 'Lendület' Group.