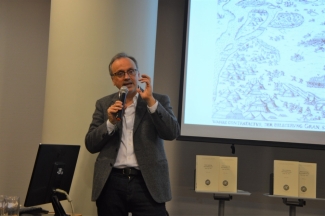 The Fraknói Research Group held it's fifth workshop on 27 October 2021 at University of Szeged's Kuno Klebelsberg Library in Szeged where the volume Pápai csapatok Magyarországon (1595–1597, 1601) was presented by the author Tamás Kruppa. The book consists 137 letters from Aldobrandini correspondence.

The volume in question is Tamás Kruppa’s first result from the Apostolic Archive. The book gave insight into the weekdays and circumstances of the papal army during the Hungarian campaign. In his lecture Kruppa presented precisely the pontifical army’s taken role in the Fifteen Years War. There  were  only  a  few  periods  in  the  history  of  Hungary  when  the  Western  countries, including the papacy, paid such attention to the Kingdom of Hungary and the Principality of Transylvania than that of during the Fifteen Years’ War.