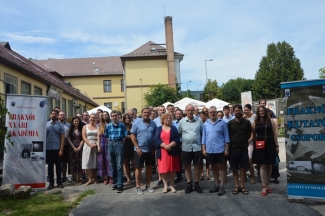 The sixth Fraknói Summer academy was organized in Budaörs between 7-8 August 2020. Participants listened lectures on church history. Curators of the event as every year were  PéterTusor and rev. Máté Gárdonyi, the director and organizer was Viktor Kanász.

On the first day the attendants were welcomed by the curators as well as the director. Thereafter István Fazekas,  Krisztina Tóth, Margit Balogh, Gergely Mózessy gave lectures in various historical topics. After the lunch further lectures were followed by Norbert Tóth C., Viktor Kanász, Ágnes Dóbék and Miklós Jávor. As the closing of the program Norbert C. Tóth and Szabolcs Varga took part in a round table discussion on the battle of Mohács.

On the second day of the Summer Academy the attendants visited Budaörs Museum of local lore, the Church of Saint John of Nepomuk at Budaörs and the old cemetery. Thereafter rev. Máté Gárdonyi massed in the Chapel of the Immaculate Conception. Finally participants were hosted for a joint dinner.

Videos are available soon on the research Group's YouTube Channel.