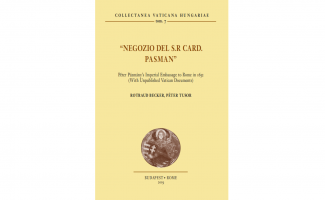 On the day of 23 May 2019 arrived the 401st year anniversary of the Thirty Years' War's (1618–1648) outbreak, the famous Second Defenestration of Prague. Thus it's no coincidence that the newest volume prepared in international research cooperation of the Fraknói Research Group got published on this very day, and it certainly pays off an old debt of the Hungarian and universal historiography (“Negozio del S.r Card. Pasman”. Péter Pázmány’s Imperial Embassage to Rome in 1632. (With Unpublished Vatican Documents) (CVH II/7), written and edited by Rotraud Becker, Péter Tusor, Budapest–Rome 2019.).

The tumultuous embassage of Péter Pázmány, cardinal of Hungary in 1632 is not just an important chapter regarding Hungarian-, church- and diplomatic history, but also an accentuated event to history of the papacy and the Thirty Years' War. It's modern and thorough investigation was also urged decades ago by the renowned expert of the era, George Lutz. The research has relied upon the documents of Pázmány’s embassage published in the 19th and 20th century (especially the documents written by Pázmány and partly the ones addressed to him); on the correspondence of the papal Secretariat of State and the nunciature of Vienna published by Rotraud Becker in 2013; on the verbals of the Secretariat of State published in this volume (about the papal audiences, the negotiations of Pázmány with Secretary of State Lorenzo Azzolini); on the discorsos and on the supplemental documents exploited in the Primatial Archives of Esztergom. During reading and analyzation, the historical atmosphere becomes real through the sources: more than 400 years later, the papal audiences and the negotiations with Secretary of State Azzolini evolve in front of the reader's eyes, and also a new, special perspective opens up due to the use of sources from the Vatican.

This closed side-project is the newest result of the Pázmány-research in the Vatican from the Fraknói Research Group (cf. CVH I/3, CVH I/13, CVH II/6), which has it's seat at the Pázmány Catholich University in Hungary.