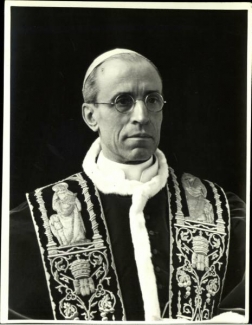 It's been a long awaited announcement what happened now, namely that the access of Vatican Secret Archives' sources about the papacy of Pius XII (1939–1958) will open to researchers from 2 March 2020.

Leader of the Fraknói Research Group, Péter Tusor gave an interview to Vatican Radio, where he stated it is not expected from a scientific point of view that the image of Pius XII will change considerably regarding his actions during World War II. The documents which serve the most crucial informations about this matter have already been open for researchers with a special permit. In fact, a research group (with the participation of Pierre Blet, Robert A. Graham, Angelo Martini and Burkhart Schneider) between 1965–1981 already launched a series of 11 volumes, in which they published and analysed the most important documents (Les Actes et documents du Saint-Siège relatifs à la Seconde Guerre mondiale, it can be accessed here).

Despite this the opening of the archives' files is a welcomed act among historians, including Hungarian scholars, because some questions could be clarified and a much boarder context could be given about the archbishop appointment of József Mindszenty and his later arrest, the stand of the Vatican during the Hungarian revolution of 1956 and the ecclesiastical governing of the territories which reunited with Hungary between 1938–1940. It is also a possibility that new details will be found on the expulsion of Apostolic Papal Nuncio Angelo Rotta in 1945 and the questions about the restoration of diplomatic relations between Hungary and the Holy See during the creation of the communist regime.

Since the mission and goal of our research group is the uncovering of Vatican sources on Hungarian matters, we look forward to the research which will follow.