Vilmos Fraknói was born 175 years ago 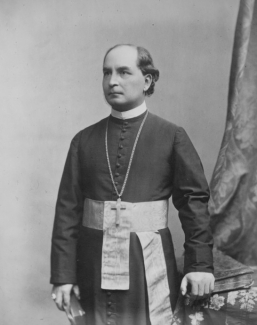 The eponym of our research group, Vilmos Fraknói was born on 27 February 1843. His family name was Frankl, which he changed to the more Hungarian sounding Fraknói after the death of his father in 1874. He became a catholic priest, and he played a big role in Hungarian historical research and the Hungarian Academy of Sciences. He became a correspondant member of the Academy when he was only 27 years old, and three years later he became a full member. In May 1879 he became the secretary general of the Hungarian Academy of Sciences, and he stayed in the position for 10 years.

He made great efforts to collect sources of Hungarian history from Italian church and state archives. One of his major achievements was the organisation of Hungarian historical research in the Vatican, the launch of the series Monumenta Vaticana Hungariae, and the establishment of the Hungarian Institute of History in Rome.

On occasion of his birthday anniversary, our research group held a commemoration and wreath laying at his grave.