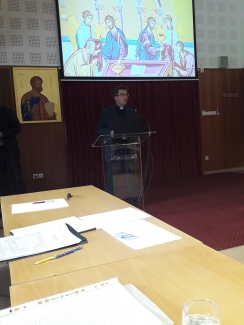 The 6th National Meeting of Church Historians was organised on 23 May 2019, where researchers and academics held a professional forum. The event was held in Nyíregyháza at the Saint Athanasius Greek Catholic Theological College, and the main organizer was Tamás Véghseő, rector of the institute and leader of the MTA–SzAGKHF Lendület Greek Catholic Research Group. Máté Gárdonyi, external associate of the Fraknói Research Group and professor of church history at PPKE HTK was the chairman of the meeting.

The conference consisted of three sections: the first one was about roman catholic subjects, the other two on greek catholic topics. In the first section, the questions of religion, nationality and identity were discussed from ethnographic and cultural perspectives through the examples of the Moldavian catholic communities and the settlement of Diósberény. The next section covered the awakening of national identity, and the relation between liturgy and multiethnicity in the 19th century, and provided a picture of the Greek Catholic Eparchy of Mukachevo (Munkács) during the 1848–1849 war of independence in Hungary. Finally, the last section was about the problematics of the 20th century in the Eparchy of Munkács and Eparchy of Hajdúdorog, mainly the questions of nationality, language use, the autonomy of the Rusyns and the Romanian-Hungarian relations.