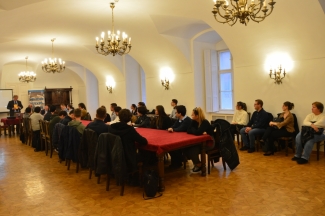 On 22 September 2022, the book „I Barberini e l’Europa”  was presented in Budapest, in the Chapter Hall of the Central Seminary, in the framework of an international cooperation between Péter Tusor and Alessandro Boccolini. The book contains the work of twelve internationally renowned historians who have studied the Barberini period and the early modern era. Mentioned volume was based on the international conference of the same name held a year earlier in 2021. It is the fifth volume in the series Acta Barberiana, published by Sette Città in Viterbo. The book was presented by György Domokos, Italianist and lecturer in the Department of Italian Studies at the Pázmány Péter Catholic University, and Tamás Kruppa, Associate Professor at the University of Szeged and Senior Research Fellow at the Fraknói Research Group.

In his speech, Péter Tusor emphasised that the conference on the family of Pope Urban VIII (1623-1644), the Barberini, one of the most important early modern papal dynasties, was the outcome of an international conference held at the Istituto Nazionale di Studi Romani in Rome, which was also organised by the Fraknói Vilmos Roman History Research Group. This also explains the book's presentation in Budapest.