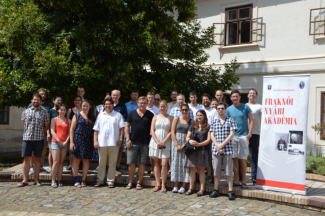 The third Fraknói Summer Academy was organized and it was held in Tihany and Veszprém during 7–11 August 2017. The subject of the scientific lectures was mainly the Archdiocese of Veszprém. Curators of the event were Péter Tusor and Máté Gárdonyi, the director was Viktor Kanász.

On the first two days of the Academy, participants could hear lectures not just about the history of the Archdiocese of Veszprém, but the newest foundings of several researchers concerning the church history of Hungary. Some of the lectures are listed below:

Máté Gárdonyi: Synods in the dyocese of Veszprém

András Forgó: The relations between the abbot of Zirc and the bishop of Veszprém. Cooperation and confortation

István Takáts: The meaning of history and the role of providence in the works of Jacques-Bénigne Bossuet

On the following days, the attendants could explore the abbey of Tihany and the Archives of the Archidiocese of Veszprém.