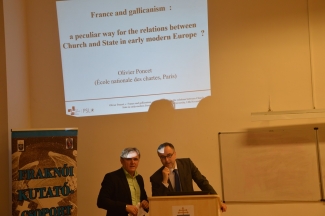 Olivier Poncet, professor and director of the Parisian École Nationale des Chartes held two lectures on 14th and 15th of November 2019 at Péter Pázmány Catholic University. The events were organized by Fraknói Research Group. The purpose of the events were to present the Vatican historical researching for the university students. From another aspect to cooperate with several international scholarly institutes. (In this case: École francaise de Rome )

On the first day professor Poncet gave a lecture entitled ‘France and gallicanism: a peculiar way for the relations between Church and State in early modern Europe?’. During the lecture Olivier Poncet divided into periods the occurrences of gallicanism. As well as he introduced the conflicts between the French kings and popes.

On the second day professor Poncet gave another lecture in historiography topic. His lecture entitled ‘A century in the Pope’s archives: what now? French research on pontifical Roman sources, 19th-21st century’. After it during the remarks session audience asked the professor about his researching and projects.